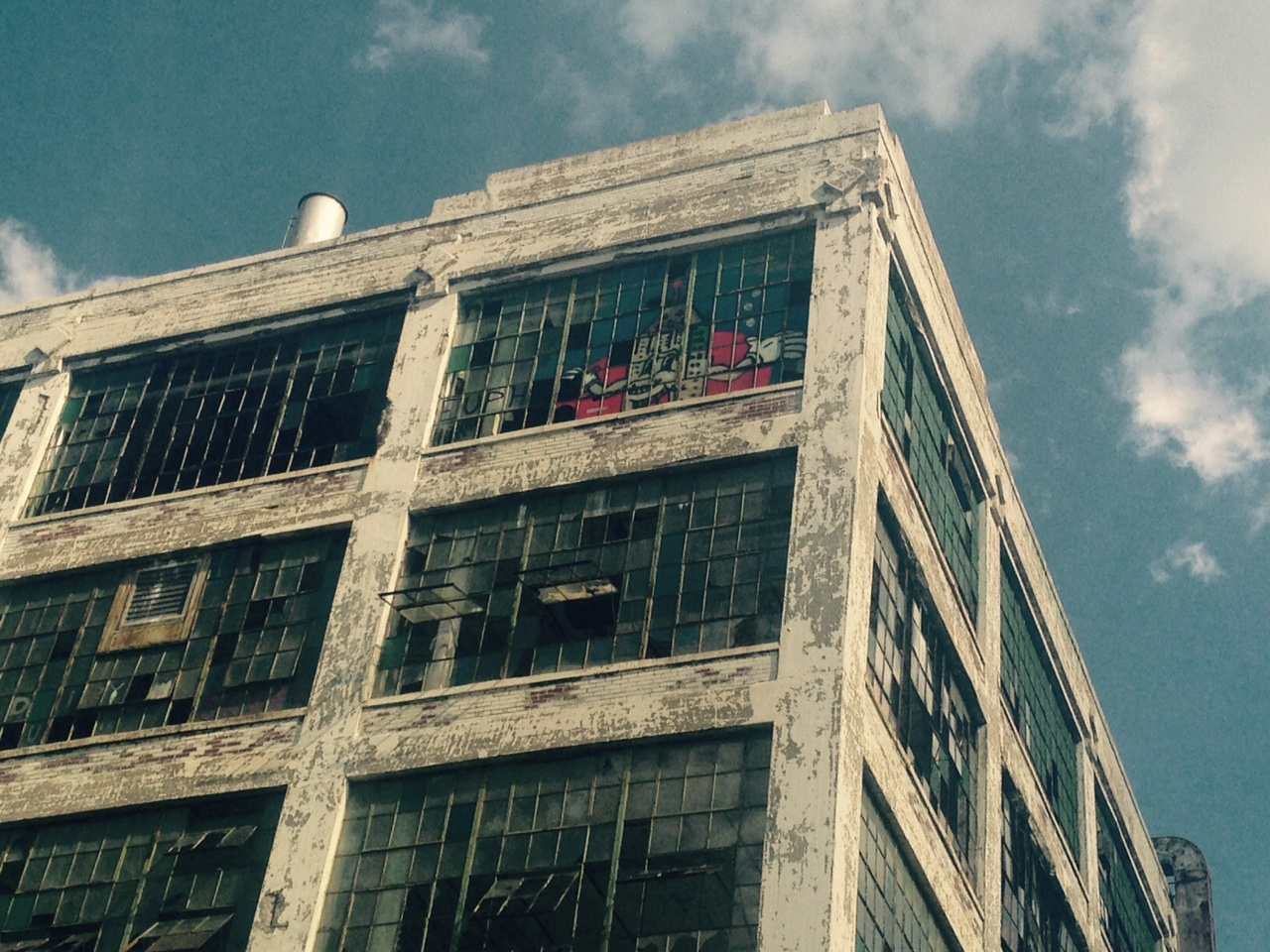 Seeing the disparate sites throughout the Motor City is an adventure that requires automobile access. Appropriately enough, curious drivers who get the opportunity to site-see around Detroit can pay homage to the very spot where the model machine that made the automobile accessible to the masses was first manufactured: the Ford Piquette Avenue Plant.

The invention of the Model T was undoubtedly innovative during the early 20th Century; the classic car remains emblematic today. However, today, the building of the Ford Piquette Avenue Plant serves as a cultural relic, its historical significance explained in texts posted upon outdoor placards. The former factory is now in the midst of a vast, desolate cityscape that’s comprised of the bustling factories and inhabited houses of yesteryear. Presently, forces of gravity and decay have noticeably transformed the forlorn two-story homes while the external remnants of a giant, boxy industrial structure have become an enormous canvas for spray paint. 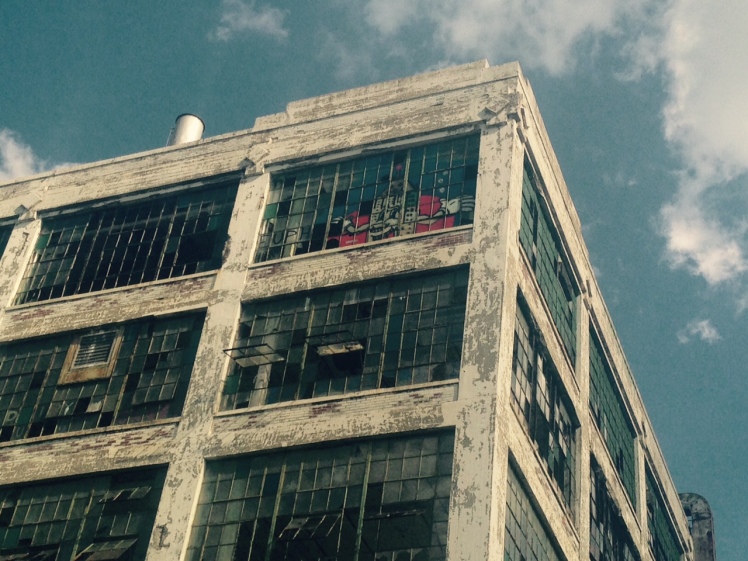 Taking a casual drive downtown isn’t something you’ll commonly hear of here in New York City. To me, the thought of heading downtown is synonymous with riding the subway. In Detroit, however, the idea of driving downtown did not sound strange at all.

We drove downtown indeed. We parallel parked on the city street to then stroll to the Renaissance Center, the ensemble of seven slick skyscrapers. We dubbed them the “Robocop towers” in reference to the film’s scenes where greedy executive leaders or flakey marketing pitchsters would schematically conjure their controlling intentions or devise outlandish outreach schemes while looking down over Detroit.

Ascending to the top floor of landmark skyscrapers is never something I do in New York (unless you count a kindergarten day-trip to the top of the World Trade Center circa late 1991). Nevertheless, I rode the elevator from the 3rd to the 72nd floor of the Renaissance Center to leisurely look out over the Detroit area.

There, the most immediate sites visible through the carousel of glass windows were Belle Isle sitting on the river, Canada stretching across the river, and the nearby sports bowl stadium where the Tigers play ball. On a greater scale, gauging the elevated panoramic scenery proved how extensively and consistently flat the landscape’s topography really was.

A more immediate component of the tower’s view, down on the 71st story, was the sets of seating arrangements and shapes that shadows formed. 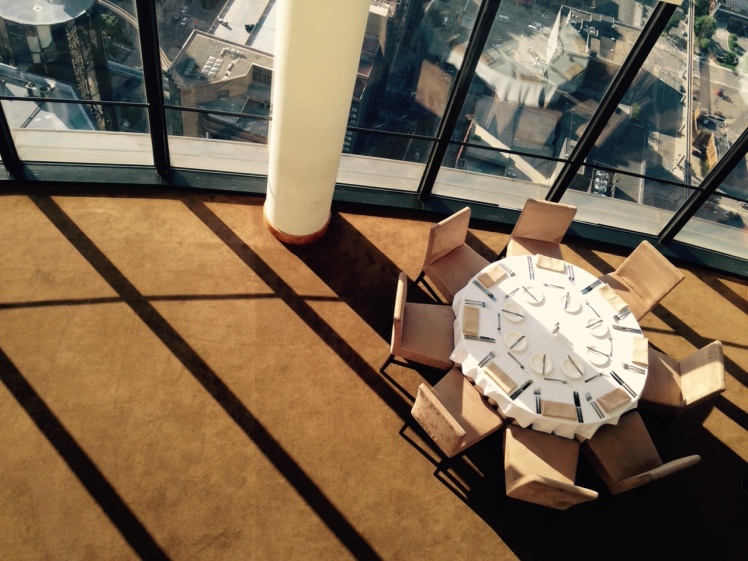 The next destination was a marvel of modern ruin, the Michigan Central Train Station. Off we drove from downtown to the defunct terminal where a train has not passed in over 27 years.

Sure, I’d seen numerous depictions of the Michigan Central Train Station, in numerous photos where the shambled state of the structure was back dropped by the downtown Detroit skyline. I still wanted to see the building my very own eyes and document it with my personal devices.

We parked in front of the fenced-off former station and studied its cracked building blocks. I strolled into a nearby small garden of what looked like wheat to get a wider perspective. Cicadas buzzed eerily as the garden’s stalks whipped and rolled with the breeze. I paced through the path of gaps that divided the patches, but failed, after several attempts, to capture a quality shot.

That night, we partook in a quintessential American car-centric entertainment activity, in driving to the suburban city Dearborn, Michigan, and parking in drive-in theater to watch a mainstream movie.

Since Michigan is a big place that of course means there is more to drive through than just the Detroit metro area. So, we ventured off to Grand Rapids, the state’s second biggest city, then to Holland, a quaint, semi-touristic village lined with candy stores and other gift shops. We then traveled as far west as we could possibly reach in the bounds of the state’s Lower Peninsula. We parked. We walked down a dune, strolled across the beach stretch, sat upon the sand, and then swam into to the great Lake Michigan. 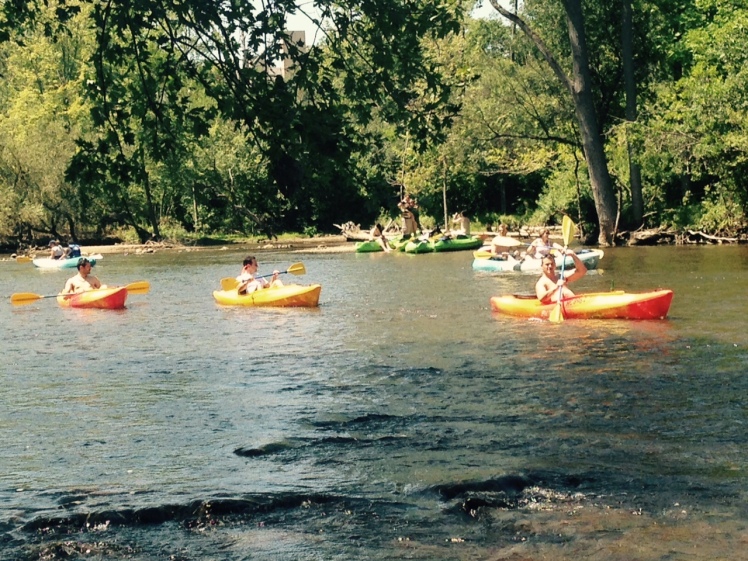 While retreating back to the Detroit area, we stopped in Ann Arbor for lunch, a Michigan city I was admittedly ignorant of except for knowing that’s where Iggy Pop was from. Ann Arbor turned out a pleasant college town that reminded me of several I’d seen (like Eugene and Ithaca) with similar commercial establishments (like local health food stores and book shops).

My favorite part of Ann Arbor wasn’t the eating or shopping, but the tubing and boating. I did neither of these activities, but partook in wading the shallow river while more equipped visitors floated by in tubes or boats.

Naturally, the car was necessary throughout the trip, but the best and most unexpected parts of it took place on foot, after parking.

One thought on “Driving, to Walk and See Michigan”