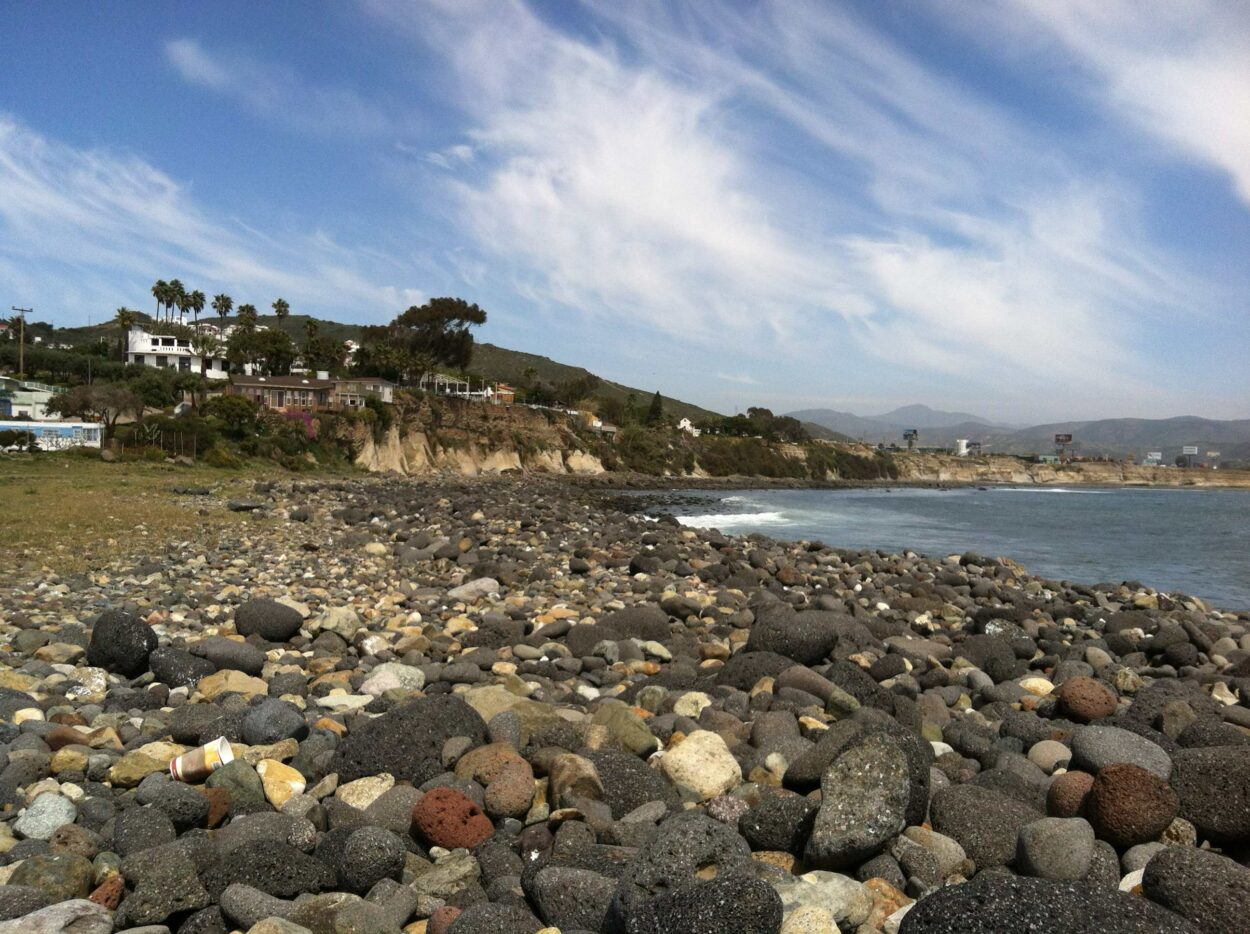 It’s finally been getting warmer around New York, and residents are rejoicing. Putting up with scarves and shivers for months on end, we certainly feel like we deserve this rewarding climactic break.

I cheated on this, however, by flying to San Diego, California, at the end of March.

Perhaps that shared sentimental brightness that results from the first warm days is not a phenomenon for people who live in a warm place and do not have to endure the everlasting challenge of coldness; but for those of us that do, we can finally enjoy the feeling of wearing a T-shirt outdoors (and even encountering the subject of your T-shirt right on the sidewalk). 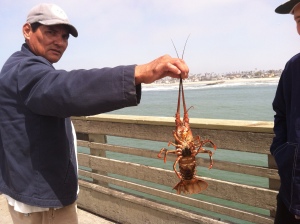 Some of the other local animals are not quite as fluffy. 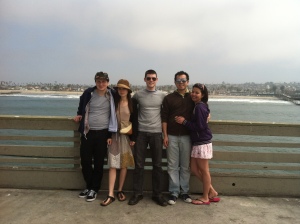 After debating whether this Ocean Beach landmark was the largest pier or second largest pier in California or the country or coast or some other record, I don’t remember exactly what it was, but it sure made for a lovely oceanic shot.

Another novelty of the Western United States is the scenic sunsets over this very body of water. When the sun finally descends beneath the aquatic horizon, the temperature goes down as well, and one can take refuge within the comfort of establishments. 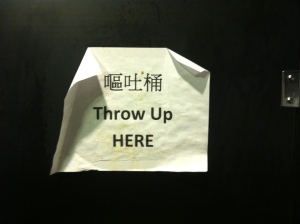 One such establishment, a karaoke hall, posts bodily etiquette rules above its plastic trash can (in two major world languages). 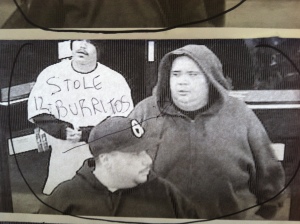 At 7-11, rather, a sign is posted to punish those who have already committed unacceptable behavior against its rules (as well as to deter future immoral acts against innocent burritos). 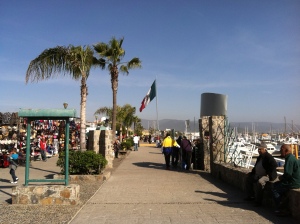 Down in Ensenada, Mexico, sunny skies also dominate the landscape in the laid-back daytime atmosphere…

…and for inanimate versions of extinct (or possibly imaginary) creatures.

Such a setting is also adequate for ranches… 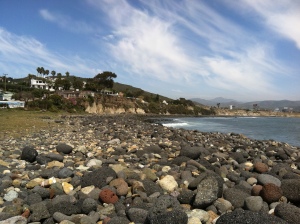 …not to mention little  villages along rock beaches. 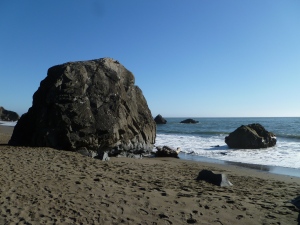 Another factor of my recent excursion was going throughout the Southern Oregon Coast via US Route 101. This route is set up on the Pacific Coast of this country, and a lot of its course almost touches the ocean, but some of it is a bit inland. As there is nothing like this road on the East Coast, this magical route is still a novelty for me, and I love exploring it in new sections  each time I am near the ocean.

We drove up Route 101 from Arcata, California, to the Oregon border, where we stopped in the small town of Brookings. An elderly gas station attendant recommended us to follow the signs to a coast guard station in order to access the beach.

We backtracked on 101 over a bridge, and drove down the hill to a small parking lot loaded with RVs and trucks. Some people were enjoying barbecues under awnings, and others were comparing stories about their traveling dogs. With all of these large vehicles, I thought it looked very American.

Of course the salty breeze, cold waters, rigid rock formations and sandy surface were extremely refreshing after a long car ride, but the most interesting part of this beach was this weird overlook area on top of a cliff. There was a lighthouse, two American flags, and a statue that seemed to replicate the over-arching Jesus I have seen in photos from some famous park in Rio de Janeiro, Brazil. I was a fan of this unusual combination.

After the big cat zoo, we also stopped by the coastal part of Bandon, Oregon. The arching geological formations looked very sharp, the air was cold and strong, and some of the rocks were engulfed by shellfish on their surfaces. It was definitely not much of a tourist spot, and seemed to be frequented by locals and their canine companions who came out dressed in outer wear, trained to protect themselves from the elements.

We also stopped in some area around Coos Bay, Oregon, which I’ve seen as a designated dot on state maps many times before. It took a while to get to an actual beach spot, with a lot of winding through commercial strips with stores all closed for Sunday, followed by sharp turns that led us to roads lined with different RV parks.

We finally got to some small beach enclosure. There were a few women actually going into the shallow cold water, who appeared to be shivering in their bikinis and huddling into themselves for warmth.

We went off to a rock formation area, and I was happy I decided to wear my hiking boots, as its hard surface was all caked with holes of surprise mud. Though very aesthetically stimulating, it smelled somewhat like rotted seaweed and the oil from canned anchovies. Nevertheless, we were able to ignore the stench, climb up a rock and enjoy lunch with a view. 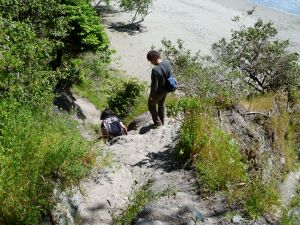 Finally arrived, after our epic journey in the Honda Accord, to a place that was new to me but that I’ve heard of and visualized so many times: Arcata, Humboldt County, California.

First drove through, saw the many one-story and some two-story houses, and plants by the sidewalks blowing around and branches whipping against the oncoming ocean breeze. The center of the town was a main square surrounded on each side with little boutiques, cafes and bars. I heard this description in the past and now it came to life in front of my deranged eyes.

Our friend took us down to the beach, which had the wonderful Pacific rock formations that we had to climb down to really appreciate this ocean view. 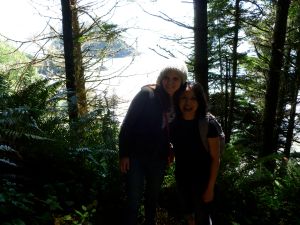 We enjoyed sitting on the driftwood and being able to enjoy the not-too-hot weather after hours and hours of sitting in the car. We hiked up through the jagged rock edges and of course our shoes got filled with sand, all the while enjoying the interesting scenery of woods and rocks and shore. 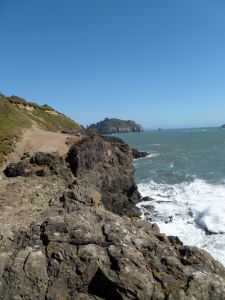 We hiked through the uphill forest and saw dense vegetation complemented by thick slugs wrapped around shrubs. Walked through more diverse geological formations and more carved-out, shady forest trails to get to a very windy area in order to watch the extreme winds crash strong waves against the upstanding sea rocks.

Our second day there was all about the plants, indoors and outdoors. We hiked through the local Redwood park, which was a strange contradiction of old and new. There were insanely wide Redwood trunks that had obviously been logged, and then relatively new Redwoods growing strong all around them, tall but not as thick nor as mighty as their reduced ancestors. 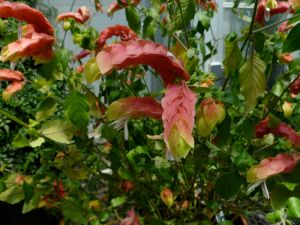 The hike ended up leading us to Humboldt State University, where we explored the campus’ science facilities. This college apparently has a very advanced science program, since there is a huge greenhouse themed after the flora of different climates, whether jungle or desert or temperate.

This self-contained and pre-planned ecosystem was an interesting island within the midst of many different natural areas that surround in its few-mile radius. Different smells and textures from locations around the globe were brought together in this department’s laboratory. It was a pleasant surprise to me to bump into a mini flower conservatory in the middle of such a place. 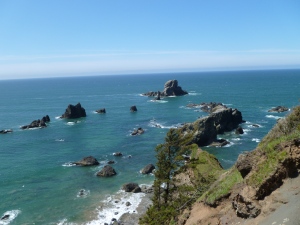 I think Cannon Beach, Oregon is one of the most gorgeous places on the Pacific Coast. Maybe it isn’t all Beach Boys surfer ecstasy or beefy men working out on Venice Beach, but it definitely has its own thing going on. The rock formations are certainly one of the best parts of Cannon Beach, I’ve never seen anything like these on the Atlantic Ocean.

I love how in Oregon the forest goes up until the coast, where it ends right before the sand. Really tall, old pine trees make the best compliment to the yellow sandy shores and the clear blue water’s incoming waves. I feel like anywhere you go around here is some crazy pristine nature experience where you realize human architecture and city lights can never quite top the aesthetic potential the earth has. 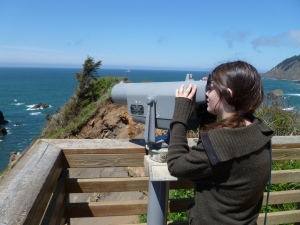 I went to Cannon Beach last week, and though I had to bundle up a little, it was really enjoyable. I went there last summer for a few hours, and though it was incredibly beautiful, it was quite cloudy, hazy and humid. This time, it was clear and crisp and of course breezy, but not crowded because it was not high season, and the ocean was a lovely stark blue contrast below the sky’s subtle blue tone.

On the actual beach part, the windy, salty cool air was another appropriate contrast to the soft and hot sand on the ground.