Thinking of it, the Czech Republic was also full of weird things. 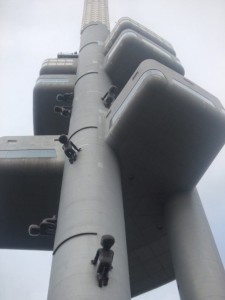 One unusual landmark in Prague was the TV tower.

I lived by Petrin Hill in Prague 6, so I was able to take a walk to a lookout point in this park, and see the Prague Castle to the left, followed by a sea of red rooftops flowing downhill to the Vltava River, crossed by old bridges, followed on the opposite banks by Old Town and pointy Gothic towers and historic sites, later engulfed by another sea of red rooftops, all eventually making their collective way under the giant, grey, modern structure of the TV tower on the opposite end of the city.

This tower would have a blinking red light at the top, and I remember taking cabs around that part of the city at strange hours of the night, and always looking upward out my car window, to notice the everlasting, consistent off-and-on glow brought on by the tip TV tower.

I went up close to it once, and it was all covered by sculptures of crawling babies. I thought this was rather appropriate. 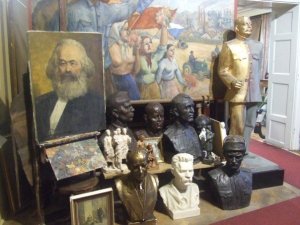 Another weird part of Prague was the Museum of Communism. I don’t know what it’s history was, but it was somehow located across the way from a casino and a McDonald’s, in an area that had been apparently very capitalized. Within such an ironic location, it looked like a makeshift gallery that some people had thrown together by searching through their grandparents’ attics for some old propaganda material to throw together. 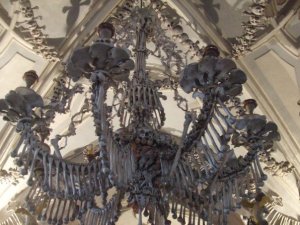 A bit outside of Prague was Kutna Hora, which had the famous bone church. This structure was hundreds of skulls, topped off by hip bones and femur surprises, arranged in the most beautiful way possible.

Individual human beings probably think of their own skeletons with a lot of regard. I had never seen a display where so many of them were just arranged all together, a bunch of passed human bodies from centuries ago actually having a physical presence in front of me. I hear of historic figures by means of literature or story, and maybe see some of their possessions in a museum, but here were a bunch of nameless humans from history actually present in front of my eyes, reduced down to their inner physical beings. 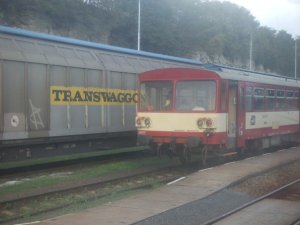 Riding the trains through the Czech countryside was also an interesting thing to do. The trains looked and acted like they had not been updated since the 1950s, so it felt like I was time traveling. I watched the movie, Closely Watched Trains, about a year ago, and it reminded me of these times.

I went the Czech at this time of year, almost exactly three years ago. My experience in this city and this country, and my nostalgia, would never be the same if it were not for all of these strange things.