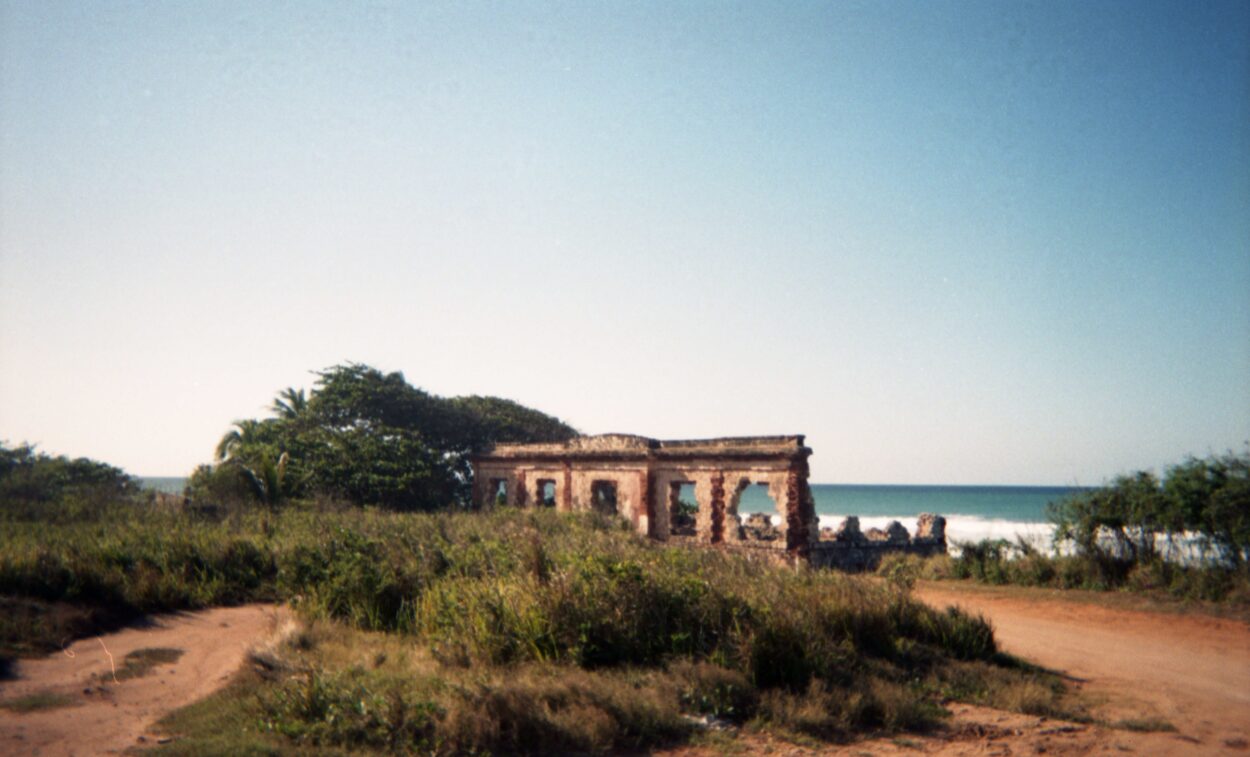 I discovered on my fifth morning in Puerto Rico that my means of digitally documenting or navigating the island were null. My smart phone had died. I consequently acquired a pair of noble instruments on which I could visually capture and travel to the remainder of places I wanted to visit: a disposable camera and a paper map.

Reading the roads off of what’s printed on a basic tourist map makes journeying through the forests in an itty-bitty car all the more intricate—and, perhaps, more intimate. Tracing the trajectories this way came challenging at times, especially when forks lacked signs or surprise signs popped up to mark unmapped roads. After dissuading ourselves from wondering why speed limits were posted in miles while distance markers measured kilometers, noting the numbers printed on the latter series of signs proved fruitful for figuring out which roads and directions we were driving.

Several stars speckled the map’s roadsides to indicate where drivers could take a break. As passenger and navigator, I took note of a few starred waterfalls and minor water bodies to go see.

We also parked outside a the entrance of a popular pedestrian path—that appeared to have been converted from a former vehicular route—for a brief hike.

Crop-wise, banana trees and coffee plants thrived throughout Puerto Rico’s central, hilly terrain. Out in the more remote, less inhabited stretches, the wild flora’s extensive branches grew gangly and would whip into our little car’s windshield as we crept on through.

Giant bamboo stalks towered above many roads, and these plants feel even more mammoth when up close and personal.

Horseback riding was the most common means of transportation for several parts of Puerto Rico. It was necessary to pause for and pass the horses as they clomped down the same paved paths.

The farthest north and west we drove was Aguadilla, a city that’s not so visited for being a city but more as a sea and surf spot. Admittedly, some of the surfers who had come to the place specifically for their favorite sport confessed that the waves were too aggressive for their taste. Since I don’t surf, I was keener on observing what the coastal scenery had to offer.

One such site was what remained from the façade of a former seaside lighthouse that was flooded last century.

Crash Boat Beach is another one of Aguadilla’s leisurely coastal spots. Swimmers jump off of the piers jutting out into the saltwater, and onshore, seagulls and pelicans flock to a Pelican Man, a figure who feeds them fish from his plastic bag.

The Pelican Man has trained several of his feathered friends to perch themselves on human arms for photo ops. Though I was at first considering extending a limb for this rare inter-species opportunity, I was immediately discouraged when I saw how bird vomited fishy bits when it was hoisted.

Since it’s been years since I’d used a disposable camera, I was reminded of the reality of its finite nature, offering a roll of 27 shots of which I should choose wisely. Upon developing and scanning the film, I realized that trying to snap a shot of Puerto Rico’s biggest stalagmite formation in the depths of Rio Camuy Cave was unwise. It was, however, a decent idea to try for an image of the lushly developed limestone ring that framed the sky view.

Although all of my phone’s fotos de gatos prior to my fifth morning had disappeared, I didn’t let that loss discourage me from enjoying Puerto Rico’s diverse feline population, one that’s composed of demographics like the lazy island bums around Culebra’s beach kiosks and peppy city mewers nurtured by San Juan’s Save a Gato sanctuary. During the hottest parts of the daytime, Puerto Rican cats can be seen lazing in whatever shady spot they deem suitable for napping, whether it is against the base of a big monument or beneath the belly of a parked vehicle.