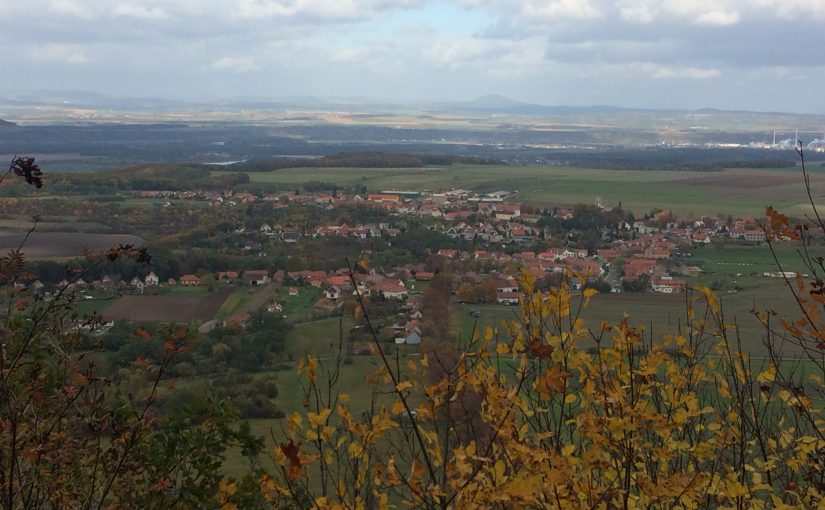 En route to and up the trails of Říp–the hard-to-pronounce title of a folkloric Czech mountain that’s sometimes referred to as a hill–I was: 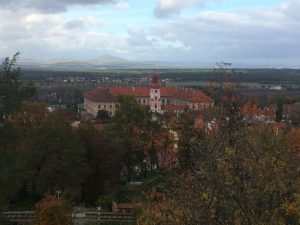 Taken to what was claimed to the lowest lookout tower in Czech lands to look out into the Polabske lowland’s nearby town Roudnice nad Labem. 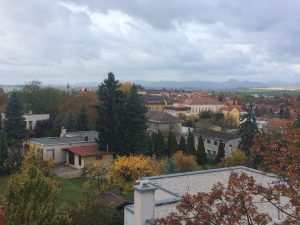 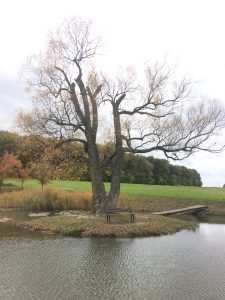 Led along the roads that ran through pastoral fields to pass by a noticeably little island within a little pond.

Exposed to the scale of the rolling lowlands. 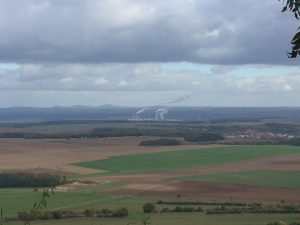 Shown a set of distant smokestacks towering above the agrarian stretches. 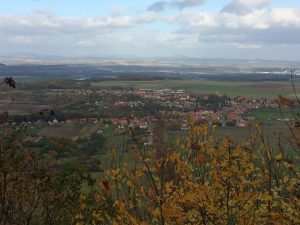 Reminded, at an unobstructed outlook just below Říp’s shortish summit, of the subtle contrast of reddish rooftops against autumn landscapes’ even subtler tones.

On Christmas 2007, I woke in Budapest in the dim apartment-hostel. I was feeling a bit sick and dreary from the weather, but it was time to depart this glorious city. We were to go to High Tatra Mountains in Slovakia. I was very excited to finally check out some nature.

We gathered our luggage and made our way to the Budapest train station, only to find out that we had missed our direct train. In this cold, dismal transit hub, we decided to board another train, which would back track westward across much of Hungary, then through a good chunk of the country of Slovakia, back to Bratislava, and then regress back east towards the mountains.

The train to Bratislava took several hours of crowding into little carts and watching the Hungarian countryside roll by. It is quite a flat scene there, up through the horizon, endless fields that contained no forest after being farmed for centuries. Hardly any wildlife was left, except for the occasional brown hare, hopping around while half disguised against the brown grass and dusting of snow.

Upon the arrival to Bratislava terminal, we decided to get Christmas lunch/ dinner, which consisted of a simple cheese and pickle sandwich. The train station there is quite small and sparse, so it is a decent place to transfer without being overly stimulated. Many people had told me to avoid Bratislava on my voyage, but here I was.

It was then aboard a train from Bratislava to transfer in some distant rural Slovakian town I fail to remember. Again there was more sparse rural action upon the many kilometers of train track, towns with little cottage houses in the snow with perhaps one or two stores as their prime commercial action. We transfered at night in the nameless town in a simple station that looked like it had not been updated since the 1960s, then boarded a new train that took us through more wintery nocturnal scenery. As there were hardly any lights, it was a good opportunity to see the stars through the window.

After a second transfer in an other unknown town, we boarded the last train to our destination, Strbske Pleso, which turned out to be more of a modern tram ascending through mountain heights. This was an interesting contrast to the plains, even though it was dark out, as you could make out the outlines of elevation. The ride stopped fairly often through different areas of the mountains, and an electronic female voice announced to passengers their names in Slovak, German and English.

Being the only ones aboard this train, we felt like standing up and stretching out and dancing around its inside, as we had spent the entire day confined within these carts and terminals.

About an hour later, we arrived to the desired mountain town about midnight, the final stop of the trolley line. This ski resort village was appropriately covered in snow, and you could make out the pointy mountain peaks against the starlight.

We tried to walk down to our hostel, but it was not open at this hour.

We tried to make it to another, fancier looking accommodation with a big and pleasant wreath on the doorframe, but that was also closed.

We walked to yet another hotel, no luck. I decided to leave my suit case there on the patio, as I was tired of carrying it around in the snow.

We made it to a stray bar that happened to be open at an odd hour, and bought some salty snacks to feel a sense of comfort in our situation. Of course it was about 1:00 AM on Christmas, and there was not a huge crowd, so this bar closed shortly after we entered.

After temporary warmth release, we were yet again out in the cold. After a few minutes of wandering, we saw an interesting-looking hotel of the form of gradual rectangular steps, so we tried to test our luck again. Fortunately, they had a room open, and although it was much more than we were looking to pay, it was our solution.

So we spent the night on the sixth floor of a luxurious Slovakian mountain resort hotel, watching the Beavis and Butthead Christmas special, snacking on some potato chips.

The next morning, we were greeted by glorious views out the balcony.

To each direction was some unbelievable winter scenery.

The following morning, we were able to enjoy a buffet breakfast and then check out. Our hotel looked even more interesting in the daylight.

My suitcase was where I left it, and we were able to get the hostel we originally intended. So it was then a day of exploring the snowy trails on foot, and watching some braver athletes climb to the top of slanted, snowy slopes and ski their way down in a zig-zag pattern. There was a giant lake in the middle of town that had frozen over, to it was possible to walk from one side to another over the ice, on foot.

Though it was very hard to finally get to Strbske Pleso, it was a beautiful time worth the adventure.

Another mandatory trip from my region in South Korea is to Palgongsan Mountain. This destination is quite the interesting mix of nature and culture. Not getting much time off, it is a treat to have both aspects combined in one outing.

The transit trek there from the city has the potential be a bit long and complicated, but completely possible if you just follow the people dressed in hiking gear. Those comfortable with subway transfers and long public bus routes that involve yanking your arm while holding a pole and flinging into other passengers for a bit will find a fine reward of sitting down as this ride drives closer to the destination. One can then relax toward the end of this bus voyage and watch the city bustle dwindle down and release into the suburbs, where one can notice the reduction of building concentration as this vehicle gradually reaches the hills.

Palgongsan is hopping with an assortment of hikers of all ages. In the United States, it is rare to find grandmothers decked out in hiking clothes, navigating a steep hill, but here, it is pretty normal.

This hike involves hundreds of stairs carved out into a steep mountain slope, a very direct ascent. About every 20 minutes of hiking, you must rest and catch your breath, but at these breaks, you are rewarded with some strikingly epic Buddhist temple or statue, perhaps with some interesting music playing in the background. Other breaks involve Korean mothers handing out complimentary fruit to you, or monks standing to the side of the trail, consistently beating on a simple percussion instrument.

The top of the mountain seems a bit other-wordly. Personally, you are worn and heated and undergoing pleasant physical and mental sensations in your head and body. At this time, you are simultaneously greeted by a large, gray Buddha carved into the rock. Dozens of people are on mats, bowing in front of this sculpture or lighting candles.

Though likely cold and windy at this peak, you are immune and able to remove your top clothing layers from all of the workout warmth, and peer over the sides of the summit fences and try to make out the network of hazy hills.