This is the beach behind where we stayed in Moalboal, Cebu. You can make out the next island, Negros, in the background. Most people travel to this city for scuba diving, but as I don’t practice that sport, I spent most of the time dazing away at beaches like this.

Here’s a lake up a volcano in Negros, the next island. It’s a refreshing break to go up in elevation and escape the intense heat and humidity.

The jungle road on the way back down to town. Half of it is paved, half is not, so it can be quite bumpy, then smooth, then bumpy, but full of tropical plants the whole ride!

These lazy bum cats lived on our porch in Boracay. They would meow on and off all day to be fed, and whenever we’d go outside or open the door, they’d run into our place like they owned it. If we ever went outside with food, they’d start jumping up and try to bite it out of our hands, before we’d brush them off. They were friendly company, nonetheless.

As the Philippines is a country of thousands of islands, a popular mode of transport is by ferry. Bridges are not very common, so travelers will usually end up on a boat at some point or another. Some are big, some are small, some are sweaty, some are air-conditioned. Some are built up well, but others make it so you get splashed with ample seawater during your ride.

Vigan sausages are not vegan. They are made of pork, like most of the food in this country.

The vans are known as Jeepneys. They are a common way to get around in a city. They are kind of like a collective open-air van taxi, bigger than a car, smaller than a bus. Many of the drivers paint their Jeepneys in their own fashion. Some are very colorful, and many have Christian sayings like “God-powered” or “Jesus is lord”. 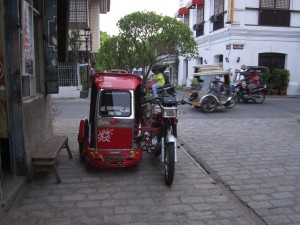 Another popular mode of transport is the tricycle. It is a motorcycle attached to a cart that has a wheel underneath. These are cheap to ride, but you’ll usually have to talk down the initial price offer with the driver if you’re not a local.

This bell tower offered a delightful view of a cemetery and mountains off to the east. This window was about one story high, so it was fortunate to have such a window not be screened or barred off from the outside. One must be careful to sit there and not fall, naturally.

An old mansion with antique furniture, also the site of some Tom Cruise movie.